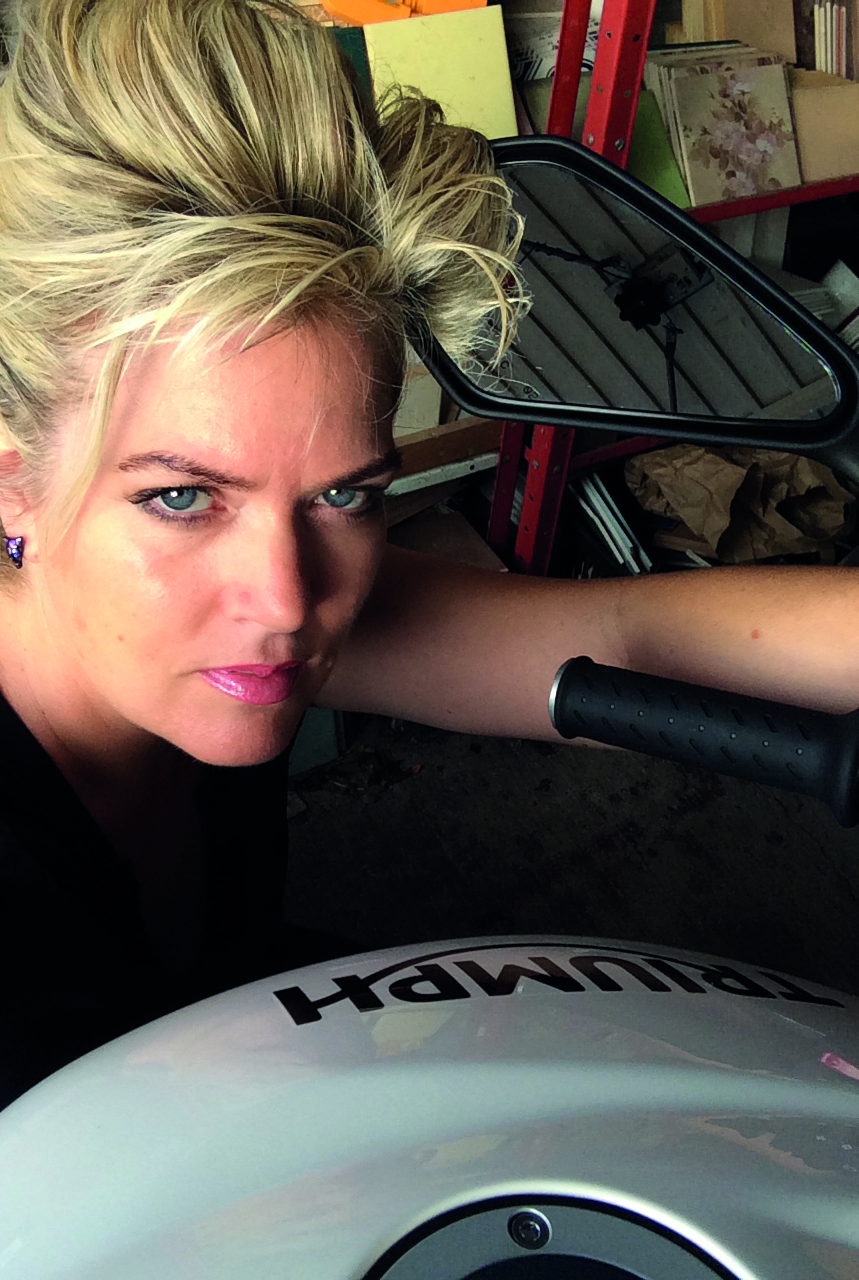 We recently had the pleasure of interviewing self-taught mosaicist Aimee Harman, author of the book Mini Mosaics.

Aimee from Peacehaven, East Sussex, is a mother of three and proud grandmother to four-year-old Alyssa.

Here is her story:

I learnt to mosaic in 1998 as a hobby. I went into business quite soon after as there were not many people teaching it. I have taught in schools, on cruises, at art shows, and big events for all different corporations, brownies, girl guides, WI, and even appeared on QVC once upon a time !

My husband Mark died 3 years ago, and I have continued to run my mosaic business alone. It made me realise how we can attach ourselves to people and situations and fear sets in when we lose them, so I made a conscious effort to become stronger mentally and do all the things he used to do. I surprised myself by my achievements. I even learnt to ride a motorbike, and passed my test first time. I have a Triumph Street Triple R which gives me an adrenaline rush after sitting for hours working on a mosaic !

How did your career as a mosaicist come about?  Was it something you intended to do as a career?

It was a hobby I took up at an evening class  that turned very quickly into a career. I felt everyone should learn this amazing transformative art , so I started running classes from my home, I wondered how to make the step from being a hobbyist to a professional, and  I wrote to the council to offer to mosaic the roundabout on the A259 for free. They agreed and it got me in the papers, and it all started from that moment. I never intended to do this as a career – I wanted to get into television or be on the stage.

How did you become involved with restoring mosaics on the Belmond English Pullman?

The Train has been very well known as the Orient Express, but was bought out by a company called Belmond in 2014. I was lucky to be spotted in a newspaper by a steward on the train who noticed the mosaics in the lavatories were starting to crumble in 1999. They got in touch with me and it totally changed things for me as I was working for Hampstead Bazaar clothes shop at the time. I soon got a lot of publicity and it led to more commissions and workshops.

Have you always been creative? Do you have any early crafting memories that stick in your mind?

I was very good at Art. I come from a large family of 9 and my mother is an enamellist but I didn’t want to follow in her footsteps as I didn’t like working with the kiln and powdered glass. I wanted to be a ballerina and an actress. I used to win a lot of  art competitions. I remember winning first prize for my school in Devon and meeting Russell Harty at the café royale for a cartoon I did.  My mother suggested I go to art college rather than drama school. I fell pregnant at college, took my exams, and left to become a responsible mother at 18 years old. So it took me 13 years to discover I had an artistic streak when I had a dabble with mosaics at the age of 31.

Do you have any crafting disaster stories that you can laugh about now but didn’t feel very funny at the time?

I remember grouting a mosaic of some sheep with white grout and it looked terrible, so I ran hot water over it and scrubbed it out of the gaps with a brush before it set but it warped the wooden base! I put heavy books on it flatten it and even put it in the oven to dry, then re grouted it black. It looked better but was very wonky and bent but I sold it to some welsh people for £50. They loved it …warps and all!

What other skills do you have? Is there anything you’d like to try but haven’t done yet?

I would love to try pottery sculpting sometime, but I know I will get addicted and take off in another direction, I like to incorporate different materials into mosaics , as there are no rules with it, you can have fun experimenting.

How much of a part does art and creativity play in your life? Who or what inspires you?

Art is a huge part of my life, I am absorbed by it, and I love being around artistic people, in music, dance or drama. Gustav Klimpt has been a huge influence in my private art as my mother did a lot of enamels based on his work.

Do you think traditional skills are becoming lost? Do you think younger generations are in danger of losing their creative skills, of actually doing and making, rather than swiping and clicking?

It does worry me that children are not being exposed to many aspects of art in schools, due to funding or pressure on the curriculum to cover the major subjects first. One of my other roles is Goddess Minerva – I travel to schools dressed as a Roman and teach history, mosaics and drama. It is surprising how many children don’t know about mosaics and once they are shown it gives them an understanding of how important art was in telling stories long before writing existed.

Computers are very important nowadays, and there are some very skilled children who can use them from a young age but I am confident there will be those that have talents and will shine through irrespective of computer games or peer pressure . 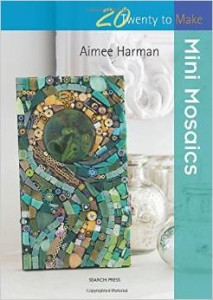 Can you tell us a little about your new book? Where did the idea come from?

The book is based on a few Mosaic projects I have made over the years, from jewellery to a paperweight, it’s a how to do it book. It’s so beautifully photographed – it’s a very “lifestyle” looking book you would have on your coffee table and flick through for décor ideas! I was approached by Searchpress publishers. It’s been a dream come true.

How difficult was it to come up with the projects? What were you inspired by for them? Which is your favourite?

It was easy to come up with the ideas. It was hard not to have them all included in the book as there were a lot of things I could have added, but they could be earmarked for a second book in the future. I love the fox face mosaic best – Smalti is an expensive material to use but the results are like a painting when its finished.

Finally, what are your plans for the future? What would you like to achieve or try out next?

My plans for the future are not to make too many plans as opportunity has an amazing way of knocking on your door when you least expect it, so I like to keep room free for flexibility and spontaneity in whatever guise it may be. I never believed that  life could change just from learning something new, that it takes hold of you , and captivates your whole being and whispers softly to  you “This is why you are here.”

Keep up with the latest from Aimee on Facebook at Mosaic Mad Romans.

Find out more about her book Mini Mosaics in our review or buy a copy over on Amazon now.