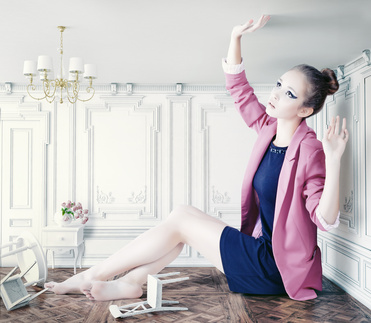 You live in a wonderful house, in a picturesque village with a nice garden. It’s your dream house. There’s only one problem with it, and it’s the one thing stopping your home from being your perfect abode: the tiny room.

It doesn’t matter which room it is, whether it’s a bedroom, kitchen, bathroom, even hallway, what you’d really like is to make it bigger. Seeing as that is out of the question, there are a few simple tricks you can try to make it appear larger than it actually is.

Try to stay away from dark shades, and keep to ones such as whites, magnolia, and light shades of your favourite colours when it comes to decorating. By avoiding browns, dark blues and other darker colours, you’re allowing more light to bounce off the walls, creating the feeling of a bigger space.

Rather than having all your belonging on show or stacked untidily in a pile, use objects such as tables and footstools which also serve as boxes to put your possessions in. Alternatively, if it is for a bedroom, buy storage boxes which you can slide underneath your bed and access easily when you need it. If you do want shelves in the room, try to keep them higher up the wall rather than towards the middle, as it will help draw attention to the height of the room.

Although ideally you would be making the most of any natural light you can get, sometimes that’s not possible. If you’re left with no choice but to use artificial lighting, opt for several lamps placed strategically around the room in replace of one overhead light. The single beam will draw attention to the lack of space as it lights the whole room as one, whereas subtle lighting throughout the place will highlight certain aspects without seeming too overbearing.

Sometimes, as the saying goes, less is more. If you over-accessorise all you will accomplish is a cramped feeling, so you need to make sure that you keep the perfect balance. Use varying shades of one colour and base all your décor around that. For example, have white walls with dark red curtains and lighter reds in the form of cushions, vases, bed covers and rugs. Try to avoid mixing several different designs as it will look unorganised and messy.

Arrange mirrors about the area to trick the eye into believing there is more room. Placing mirrors near windows and in corners are good techniques. By using a wardrobe or cabinet with mirrored doors, you give the illusion of more space while also gaining storage.

Vertical stripes help to exaggerate and elongate anything, whether it’s a shirt, table or room. Use items such as stripy rugs and throws to make the room seem longer. You could even have a stripy feature wall to make the room seem taller. Be careful not to overdo it though, as using too much will do the opposite of what it intends.

Just a few simple tricks will leave even the smallest of rooms feeling bigger. Do you have a favourite trick to add to the list?